Ooph, it’s been a busy couple of weeks here behind the scenes of Tea & Tales!

The sun is out, birds are singing and spring flowers are blooming – spring has sprung and this beautiful city is becoming lovelier and lovelier. When you’re working hard in these conditions, it’s easier to bear – but there’s still not much that beats a stroll through the sunlit streets of Edinburgh followed by a relaxing Cream Tea. Today, we went to the tourist hub: the Royal Mile, and had a stop at Forsyth’s Tearoom. 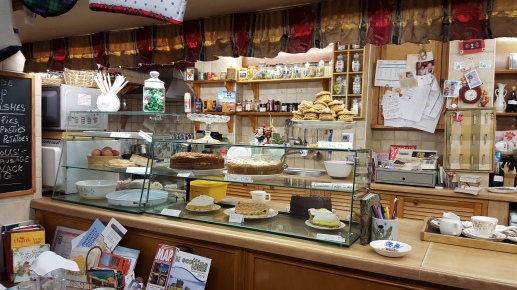 Forsyth’s Tearoom is a wee little tearoom hidden in a wynd just off the Royal Mile. It continues last week’s theme of your grandmother’s living room, as the interior full of a plethora of crochet decorations, jokes relating to Scotland and Scottish – oh, and it’s run by a lovely purple-haired eldery lady. When you walk into the tea room you are immediately faced with the counter, displaying yummy freshly baked goods, and the owner doing the dishes behind. 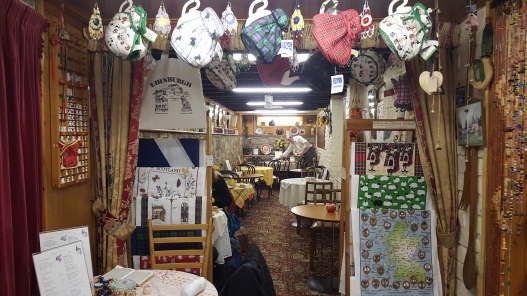 I opted for a Cream Tea, as I was feeling particularly stressed, and was handed the cutest kitschy china I’ve seen so far. There was, unfortunately, no choice of tea (or at least not that I noticed), but there is nothing wrong with a generic tea every now and then. It’s cheaper than a loose leaf tea, and although it lacks the nuanced flavouring of a loose leaf tea, it can still be comforting and warming. The scone was still warm and smelled absolutely delicious. It came with butter, jam, and whipped cream – no clotted cream unfortunately, but the jam was more than good enough to make up for it. The flavouring of the scone was perfect, exactly the right amount of sweetness and quantity of sultanas – but the texture was a bit dense.

That said, having a quick Cream Tea at Forsyth’s Tearoom is very relaxing. Maybe it’s because it looks like grandma’s living room, maybe it’s the lovely service, or maybe it’s just because you’re having tea in a beautiful city surrounded by lovely people.