Alright, it’s week 3 in Ender’s sci-fi month, and the Star Wars hype is calming down as we reach the climax of the Ender’s Quartet!

Pooh, so here is where it is starting to get too difficult to write concise summaries for the stories. The story continues from where we left off in Speaker for the Dead, with the fleet coming to destroy planet Brazil (note: that’s not it’s official name), and the buggers, pequininos and humans attempting to live together in peace. Miro, Ender’s stepson (yes, he got married!) is crippled and miserable, and everybody is attempting to save the universe by destroying a cell-deconstructing virus, which might just be sentient. Simultaniously, Jane, Ender, the hive queen and the pequininos are working to build space ships so the inhabitants of Brazil can escape before the fleet reaches them. So that’s planet Brazil. The other half of the story takes place on planet China. Here you have essentially 2 types of people: normal people, and godspoken people, whom the normal people serve. Their religion and planet are called Path, which ties back to the real world religion of Taoism (only it’s different). Two of the most holy godspoken people, a father and daughter, get the task to see what happened to the fleet that was going to planet Brazil and disappeared.

I can’t really say a lot more without spoiling anything, honestly. If you don’t want to spoil the story (and there’s a lot to spoil!) skip to the next picture. See you there!

There are 2 major spoiler to discuss, so I’ll just keep it to those and start with the easiest one, which concerns planet China.

The godspoken people are revealed by their extreme OCD symptoms. This is explained as the gods punishing and cleansing them via individualised rituals – Gloriously Bright, the Path protagonist, has to follow wood grains on the floor boards until she feels pure, which can take hours and hours. The godspoken are also of superior intellect, and it is revealed by Jane that this combination is not accidental: the Starways Congress (the UN of the universe) manipulated the DNA of the people of China so some have extraordinary intellect, whilst also being curbed by their OCD. Once this is revealed, the whole of China collapses and becomes equal. Only Gloriously Bright cannot let go of her rituals and because she cannot “hear the gods” anymore, she spends the remainder of her life tracing wood grains.
This is so, so sad. Gloriously Bright is not the nicest of people, but you can’t help but feel for her when she is forced to torture herself by tracing lines on the floor. When she renounces her father, whom she worshipped more than the gods, and devotes herself to her rituals even when it is revealed to have nothing to do with the gods…it’s absolutely heart breaking. Also on a planet wide level it’s really crushing: on the one hand the godspoken are freed from their rituals and the other people of their life of servitude, but on the other their gods have abandoned them and their existence is brought into serious question. The build up is subtle and brilliant, and the sucker punch payoff hits you straight in the heart. Ouch.

The second spoiler I quite frankly only partially understand.

Brazil is being evacuated, due to the war fleet coming and all, and there is simply not enough time. Unless…they discover space travel which is as fast as the speed of light!
So essentially what happens is that based on a theory that the smalles particles in existence (philotes) connect everything and everyone, and that there is a space outside of the universe where there are unconnected philotes, they do superspeed travel. Jane, the computer entity, has to envision the structures of the ship and the people inside, pop them “outside” while remembering their structures, and then pop them back in. This allows for lightspeed travel, but it also does something else. While on the ship, Ela (Ender’s stepdaughter) creates the antivirus to save humanity, Miro creates a new, able body for himself, and Ender creates 2 bodies: child Peter and Valentine. This is possible because they thought of the structures while outside.

I…I don’t know. This is the seed for the weird stuff of the closing chapter of this quartet, and I’ll just leave it for now. It’s a strange combination of cool and very confusing. I’m not going to lie to you, dear reader, I’m not very good at abstract physics. This all goes way over my head, but it’s nice to imagine that it is true, as the theory also means that people can connect in ways that transcend human life. And that’s just a very nice and comforting thought. One final thing to add: real life Valentine is not happy with her duplicate. I see trouble brewing! 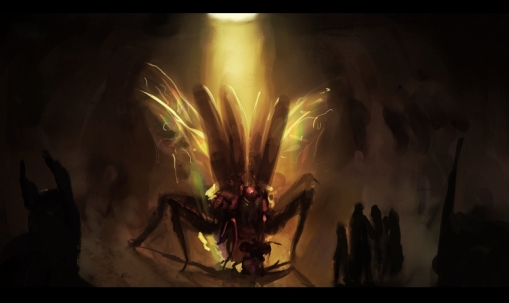 It took me a bit longer to get as absorbed into this book as I was with the previous 2, which is probably because the world is getting pretty big now and there are a lot of characters to keep track of (and I’m bad enough at that with real people). However, these characters all feel so real and alive, and you really, really feel for them. This is what makes the philosophical questioning aspect of the story not oppressive at all, it’s all just a logical result of their world and life. One of the main themes of the story is the role of organised religion in society. And it’s very clever about it. On both planets Brazil and China human life is shaped by either the Church, or the gods of the Path. Both have their positive and negative sides, as it keeps people together but it also oppresses.
This is a very clever book, so humanising and it shows real understanding of the human condition. I love it.

Look, this may be a bit cheesy, but because the story takes place on planet China so much and is so concerned with philosophy, I can only think to pair this book up with a soft and mellow green tea. It’s just…the gentleness of the scent and flavour really facilitates your thinking capacities, and you’re really going to need that! This is a book that makes you think, and you need something that allows you to do that. It would be wrong to combine a story about planet China with a Japanese tea, so I matched it with a jasmine green tea. Again, unfortunately this is a tea I picked up at a Chinese supermarket in Antwerpen and I don’t really have any information on it.

So this was it you guys, the highlight of Ender’s Quartet is over, and now all that’s left is Children of the Mind. This is where it all gets..weird… So cling on to your copy of Xenocide, give your mind a free reign with a relaxing yet also energising tea, and brace yourself for next week.. 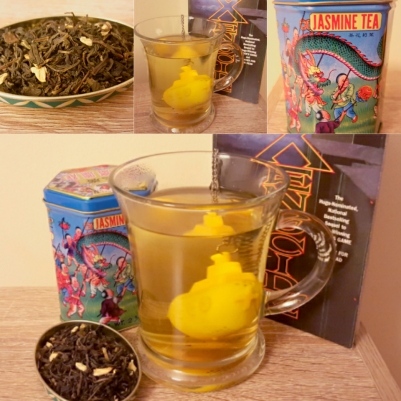